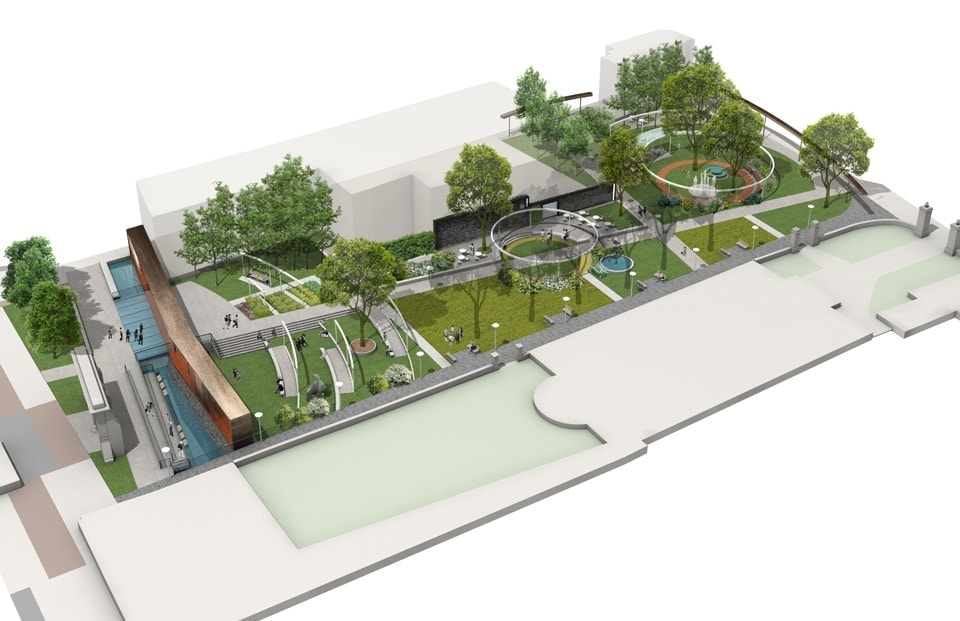 The aim of our project for Bishop Lucey Park is to seamlessly combine nature, traces of history, and the contemporary city to create a hybrid and dynamic public space. The first step of our design process was to investigate the competition site, its evolution over time and its potential role in today’s city, also taking into account ongoing and future urban transformations, such as those currently involved in the “Brewery Quarter” nearby.
In such a changing context, our primary goal is for the new park to be a lively and engaging space, not just a passive link between the Grand Parade and South Main Street. We based our design on two main wishes; on the one hand, to provide better integration between the site’s archaeological features and the urban realm, and, on the other hand, to create a diverse and attractive park suitable for as many different groups of users as possible.
An early analysis revealed a number of urban signs and “traces of history” within the competition site; we translated these into two overlapping geometric grids on which we based the design of the new park’s “backbone” and all main pathways. Thereafter, we created a sequence of three functional areas, described below, along the axis between the Grand Parade and South Main Street.
The historical value of Christ Church Lane has been preserved and highlighted; grey limestone paving, lighting, and bespoke benches, together with the existing row of sycamores, emphasize its character of a tranquil walkway for relaxation and contemplation.

Since the park was conceived as a public space open to the city, all fencing on the Grand Parade, Tuckey Street and South Main Street were removed and replaced by three large portals. Functional scheme Each of the parks’ three main functional areas – archaeological area/open-air theatre, central plaza, and children’s playground – is identified by its own unique set of elements – paving materials, furniture, shelters, lighting systems, and vegetation.
All functional areas are surrounded by extensive lawns that can be used for relaxing, having a picnic, or simply spending some time out, as well as accommodating small markets, events, and art installations. 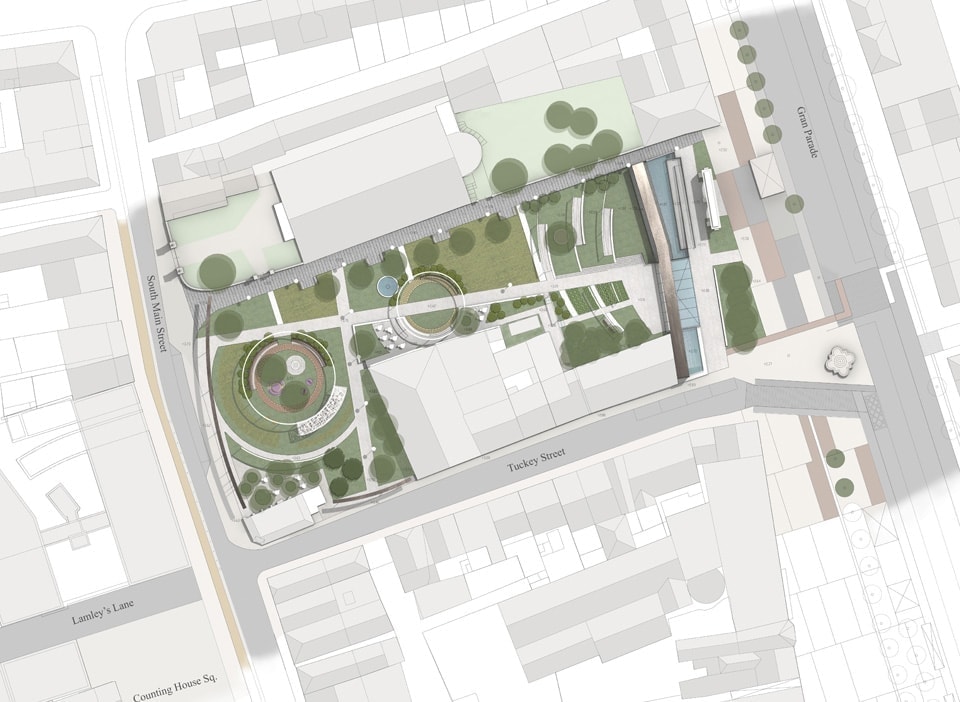 1) Grand Parade entrance | archaeological area | open-air theatre
The Grand Parade entrance is marked strongly by the remains of the medieval town wall. To present the wall meaningfully, it is necessary to communicate its original scale and position within medieval Cork, and how it marked the boundary between “inside” and “outside” the city. Furthermore, the wall should be integrated as an active component of the new park, not just as a passive “relic of the past”. To give an idea of the wall’s original shape and height, a large metal frame visually “extrudes” its footprint and evokes its physical presence; a pedestrian ramp leads to a lower platform from which visitors can examine closely the exposed remains of the wall; historical information and reproductions of Cork’s old maps are printed on a long graphic panel fixed to the parapet just in front of the exposed portion of the remains. Water is also an important element in this part of the park; a continuous basin on two levels, partially surmounted by a steel and glass entrance footbridge, borders the medieval wall on its Grand Parade side; water in the basin slowly flows and is continuously filtered and recycled. The idea is to make people entering the park from the Grand Parade feel as if they were crossing the channel that once edged the walled city. Finally, the ground levels close to the western edge of the wall have been lowered, thus providing a better view of the remains and, at the same time, creating a small open-air theatre to be used for live performances and art exhibitions. On the south-eastern part of the park, beside the existing birch grove, a small botanical garden with medieval edible plants, fruits, and herbs will help to contextualize the wall remains and help the park users understand what everyday life once was in Cork in the Middle Ages. 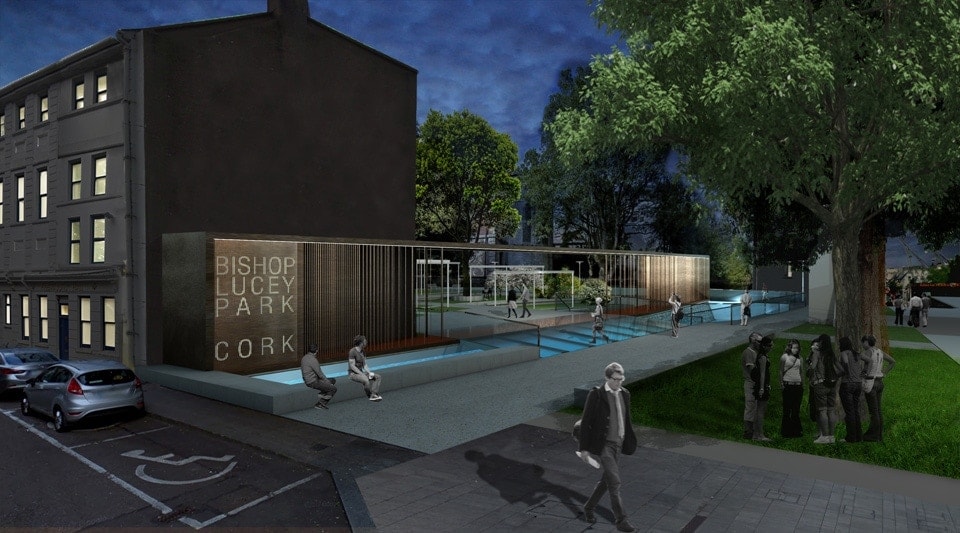 2) Central plaza
Proceeding westward along the central axis, the second functional area is a small circular area encircled by benches. This small plaza is a socialising space with paved terraces on which bars and cafes surrounding the park could install seats and tables. Above the plaza is a thin steel ring containing the lighting and video-surveillance systems. Therefore, what is now perceived just as the back of Tuckey Street will become a new urban frontage opening onto the park’s central square. 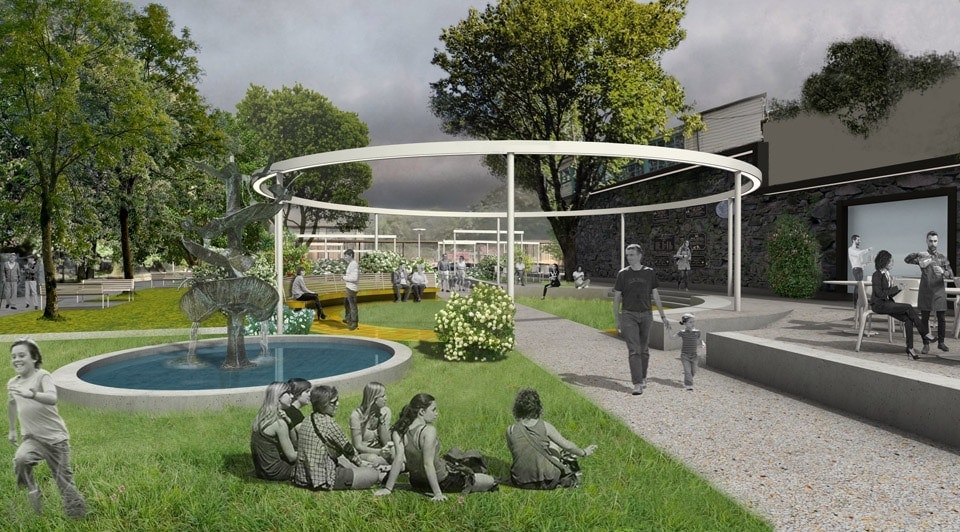 3) Children’s playground/active recreation space
The area closer to South Main Street is primarily aimed at children and families and accommodates playgrounds, with swings and other playground structures that are also suitable for disabled people, a small cycle track, a sheltered recreation space, and a dry plaza fountain/splash pad. As in the central plaza, this space is topped by a circular frame supporting the lighting, audio, and video-surveillance systems.

Archaeological strategy
A crucial point of this project is the possible presence of archaeological remains not yet discovered within the site of Bishop Lucey Park. Previous excavations (see M. Hurley and D. Power, 1981, The Medieval Town Wall of Cork, and M. Hurley, 1985, Excavations of part of the Medieval City Wall at Grand Parade, Cork) have surveyed the area adjacent to the medieval wall. The results of those excavations were considered in the design of the new park; for example, the foundations of the large steel frame topping the medieval wall consist of five bridge-like structures whose support points were positioned so they do not interfere with the archaeological remains. Yet, less is known about the archaeology of the park to the west of the wall line. Therefore, we avoided excavations deeper than 0,7 metres (measured from the current ground levels) and made the park design flexible enough to adapt it to the discovery of new archaeological structures without compromising its functionality. In any case, ground-disturbing works will be preceded by preliminary archaeological sampling and monitored by a qualified archaeologist.

Materials
Materials for paved areas comprise porous concrete with exposed aggregates for main paths and courtyards, gravel for secondary walkways, and grey limestone for Christ Church Lane. Retaining walls and kerbs are in reinforced concrete, clad with coloured porcelain tiles in the central plaza and in the playground area. Metal structures (entrance gates, shelters, lighting tracks, and lampposts) are made of coloured 316 stainless steel and powder-coated galvanized steel. The playground shelter is covered with thermally toughened safety glass. Benches, brise-soleils, and tables are made of steel, hardwood, and exterior-grade plywood.

Lighting, safety, and security
The artificial lighting system of the new park consists of linear and circular lighting tracks, located along the main pathways and functional areas and equipped with 20W-50W LED lights, complemented by a limited number of lamp posts, positioned mainly along Christ Church Lane. The advantages of this solution are a high degree of flexibility, the possibility to modify the number and position of light sources, and electrical ducting that is contained mostly in aboveground tracks, thus making maintenance easier and providing better protection from flooding. Another advantage is that these structures, along with the lighting system, also accommodate other technical systems, thus bringing video-surveillance, area monitoring, alarm signaling, and communication into every corner of the park to improve security and safety and prevent antisocial behavior. 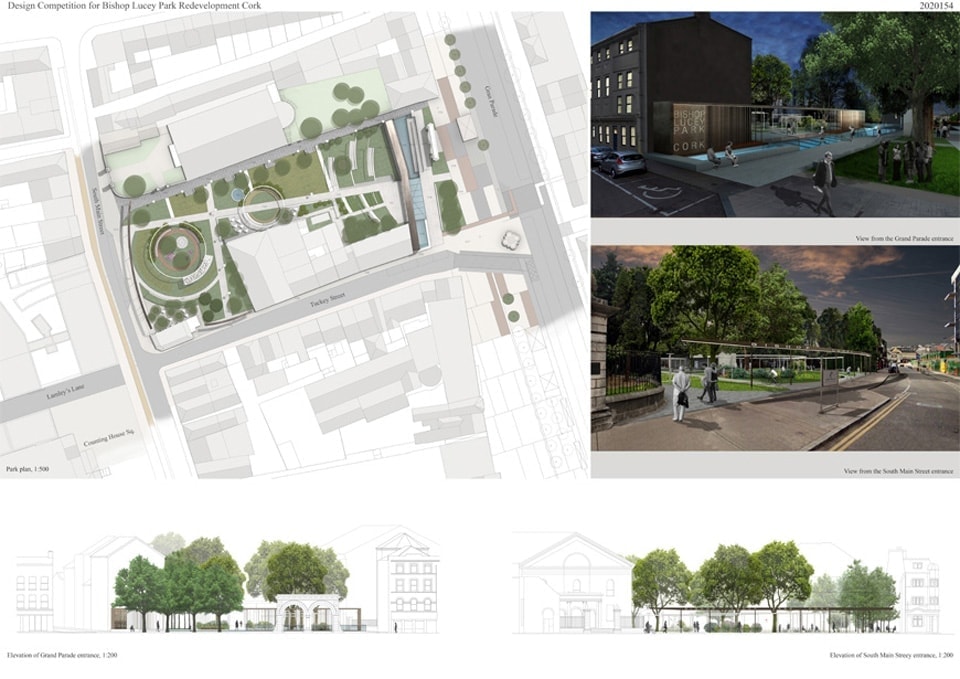 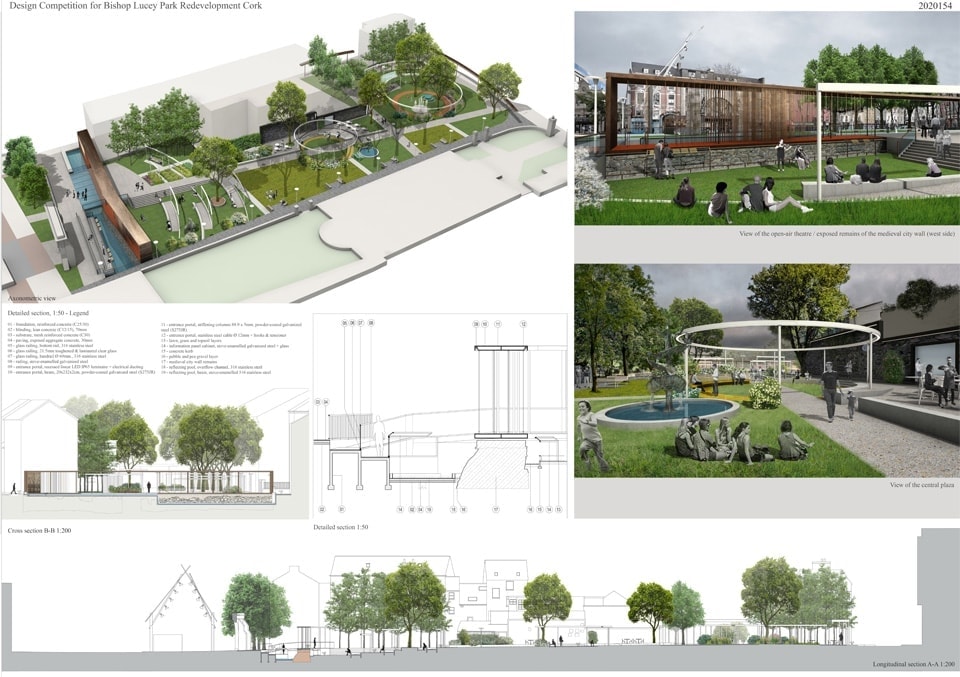